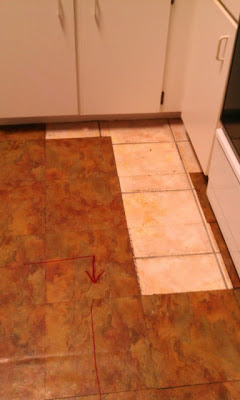 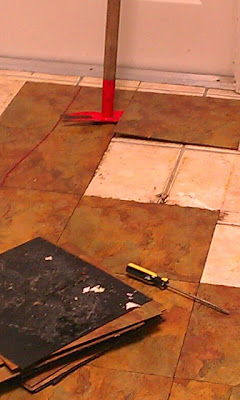 You guessed it! It's hard work but somebody has to do it.   Since I am off in the summer, I decided I had had enough of this dingy laminate that at almost every union had gunk compactly glued to the tile. I would have to put a razor to it to get rid of the dirty glue and that would damage the tile to make matters worse the tiles had slid out of place and in some cases there were crevices where you could see the beige ceramic tile underneath.  It was horrible!

Today on a spur of a moment, I did what I had been thinking about doing for over a year.  I tackled it with a flat head screwdriver and a permanent ink pen.   The screwdriver was for lifting and separating the laminate from the tile gently.

What was  the marker for, you ask? The marker was my way of drawing a line in the sand.  Basically, I was burning my bridges. If you write on laminate with a permanent marker there is no way you can get that off so that is why I used it.  In addition, I also wanted to mark the walking path I could use until I had removed the glue from the floor.  You see these laminate tiles are sticky.  You can remove the tile but the tile leaves glue behind and you have to come around later and remove the sticky stuff. It will get on your shoes and on anything else it comes in contact with.

So there you have it.   I know it is going to take me at least three to four days to complete this renovation,  maybe even more.  You see after I remove the glue then there is the sealing of the mortar between the tiles since a lot of these became loose.  This is turning out to be a project! 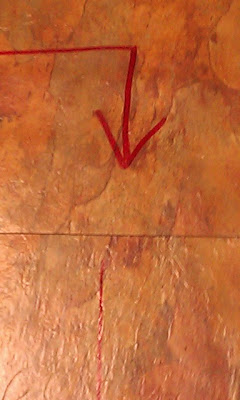