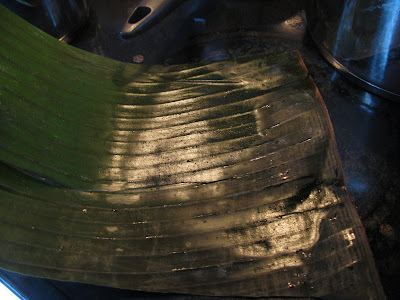 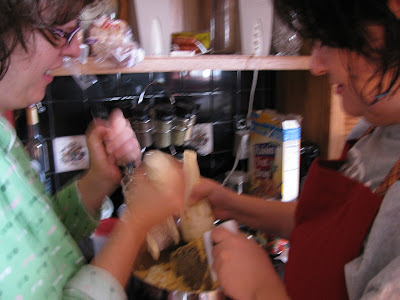 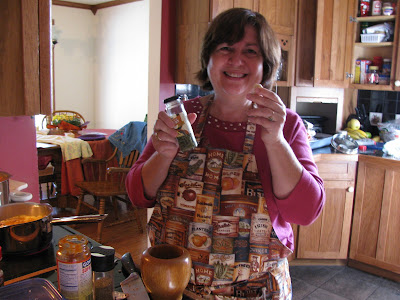 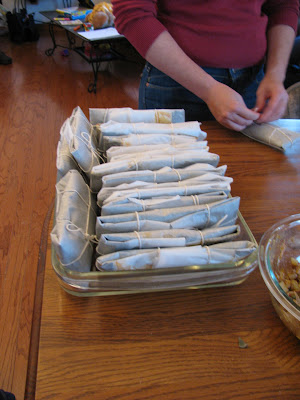 The Pasteles recipe was something so revered in my family, I thought I would never be able to make them. It would be impossible, I thought to even come close to making them like Titi Sarita. Then I got the funny idea of making some with my daughters when I met up with them for Thanksgiving. It was a struggle. I wanted to make them, but I was scared to. My first attempt many years back had resulted in rubbery pasteles. So it was no wonder that I was hoping they would forget it. Just when I thought they had, my two daughters mentioned the pasteles again and that we had to be up early to make them. I really didn't have the complete recipe, but we did have all the essential ingredients including the pork (pernil), plantains (platanos), yautia, we had to forget the green bananas because they started to ripen, but we had sofrito, garbanzos, plantain leaves, achiotina, adobo, garlic, etc. There was no way getting out of it. It was doom or die, more or less. How could I disappoint mis hijas? They wanted so much to do them, and deep inside, so did I. So we started grating the 7 plantains, two yautias, and one potato. (The potato I felt was a sacrilege, since I never recalled one in Titi's recipe, but a good friend (she's a great cook) swore by it so I decided to try. I managed to grate half of one plantain, and Rosita took over my grater. Ana had one, too. I wanted to help grate more, but Rosita would not hear of it. Frankly, it was hard work and they were enjoying it!

So I ended up supervising. Checking and seasoning the filling, peeling the one potato and yautia, the latter being as slippery as soap, cleaning and preparing the leaves (with Rosita) by searing them over the hot stove. When you are making pasteles there is always plenty to do. I consulted the simplified hand written recipe, my Aunt Sarita, had given my mother. The recipe said, the ingredients to the recaito, and basically said what you had to do the day before, and then added the words that we were to "pegar hacer pasteles!" In other words, get to making the pasteles!

It was then that I had to rely on my memory of the several times I had helped make pasteles with all the womenfolk in the family. How they used a tablespoon filled with achiotina (annatto heated with olive oil or lard)to make a shiny circle on the plantain leaf, then scoop some masa on the leaf, make a little indentation and place the meat filling, add two garbanzo beans, one or two olives (Ana insisted I not be stingy with the olives), fold the banana leaf, then fold the parchment paper over it, and place the pastel on the string, loop the cords and tie it up. I thought we might be able to make 7 to 10 pasteles if we were lucky. To my surprise we were able to make 18, and after boiling them for an hour, to my utter shock and joy, they actually tasted pretty good! Modestia aparte!

What did I get out of this experience? First of all, it was a reminder of how much I love my daughters; they are the best girls in the world and with family we can do almost anything. And that I am no longer afraid of making pasteles. Gracias a Dios!

Ana said…
I am glad we didn't let you duck it since it helped you overcome your fear...but really it wasn't about us at all.

If you hadn't wanted to make them...we wouldn't have pushed you to make them...honestly prior to these pasteles I have never had interest in making them because I had never previously had a pastel I liked...so consider that a victory for your pasteles, "first pasteles Annie has ever liked"

So really, you would have never disappointed us by not cooking them, it was only that you talked about doing it, we went through the trouble of buying all the ingredients, including crossing borders with plantain leaves...but it was your thing and I was only going along with it because you had been so set on it, and I thought we would be disappointing you if we forgot to make them...

It was so interesting in retrospect to see how we all had these very different expectations of what was happening. I didn't care about the final product, and was there to enjoy the cooking experience of being together and working on something (it could be have been anything else), and then Rosie had her expectations and you obviously had this big weight of tackling your family recipe...after it became clear that was your need, I had to go out and get that darn twine.
Wednesday, December 02, 2009

Rosangela Canino-Koning said…
I was totally excited about making them. I like pasteles, and I was geeked to learn how to make them. Now I feel like I can tinker with the recipe a bit and see if I can make the masa more savory, or whatever. :D
Wednesday, December 02, 2009

Elba said…
I want to make pasteles again. It has been too long!

Elba said…
I want to make pasteles again. It has been too long!