What could make a woman of a certain age carry an old beat up sewing machine up to a second story apartment? I didn't have to do it alone, thank goodness!  My son, Juan, who was visiting helped me.  What motivated me though was that I see this machine as a treasure.  There is a little bit of history here.
When I asked my sisters if either of them was interested in the sewing machine,  I  was dreading one would say yes but they didn't, to my surprise.  How could they not see how beautiful she was?  I yelled a big "Yes!" inside my head as the last one said she had no problem.  For some reason it had been my dream to get it.
You see I learned to sew on that machine when it still did not have a motor and I had only a twenty dollar allowance.  I so remember peddlling the machine to work the clickkity clack of the gears as the neddle whirlled.  If I went too fast the cable would get undone and it would end up slowing me down because I would have to get down on my knees to put it back in its groove.   I didn't want that, so I had to learn to understand the old dear.   I finally got in tune with the ole Singer after watching my mother sew and  it was where I eventually sewed several "granny " dresses, a soft flowery fully lined empire dress, shorts, tops, A line skirts, and even a purple bathing suit. I loved it just as it was.  Even when my mom added the motor,  I still wanted to use it the old fashioned way and I did for several years until I graduated from college.
Eventually, I got a good job and  moved to my own apartment and  got my first pay check.  What was the first thing I thought of buying?   Would you believe a sewing machine.  I really wanted an old fashioned sewing machine but mom said no,  I had to get something modern, electric.  I respected her opinion especially when it came to sewing since she came from a long line of seamtresses. So of the few times my busy mother of five had time to shop, she excitedly went with me.  We went to Sears.  It was the early 1970s and after looking over all the machines and the money at hand,  I bought the equivalent of a Cadillac of the Kenmore line.  It zig zaged, made button holes, blind hems,  and funny designs with these sage green fitted plastic shapes that you popped into a gear and the machine obeyed.  Though I found it efficient, yet its lack of simplicity made it cumbersome but I nevertheless used it.  But I never forgot the Singer.
Years went by and I even moved to the States and got two other sewing machines.   One with a very husky European name, mind you.   In spite of that, I always looked nostalgically at the Singer sitting idle in Mom's storage room but mom said she still used it.  She in fact had taken some sewing classes at a community center and turned out a whole slew of cookie cutter cotton button down blouses that became her trademark. That was about ten years ago.  More years went by, and by then mom was moved to a nursing home and finally this year I moved back to Puerto Rico.  Adjusting to life here and falling into a routine,  it wasn't till a month ago when I entered her old house that sits vacant, that I discovered that this treasured sewing machine was just sitting there in a room gathering dust and much worst, bugs!  I knew I had to get her back!
Unfortunately she is no longer in pristine condition.   I know it is going to take work.    She had been abandoned and termites have taken a liking to her wood but I hope to restore her.  Perhaps I can find some spare parts. I don't know how I am going to do it.  What I do know, is that I am going to try to put her back like new. I can see myself taking it apart, dusting off the cobwebs, lubricating the wood, and oiling the wheels.  Perhaps I will hear her whirl and the familiar clickaty clack. That would be music to my ears!

P.S.  You see those old rusty crocheting needles at the bottom?  Well, those were my mother's and they were in the top drawer of the sewing machine.  I used them to learn how to crotchet and I have been crocheting ever since.  The baby blanket pictured below was done by me as well.  Thank you, Mom for teaching me how to crochet! 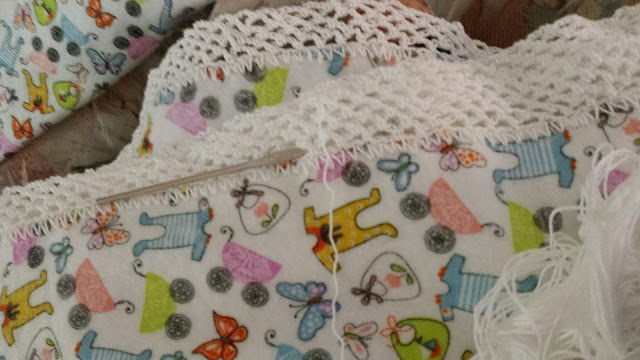 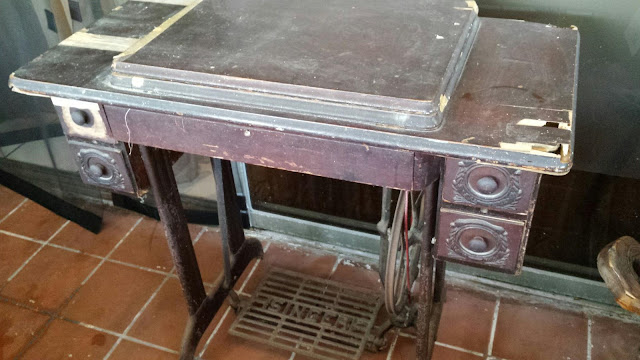 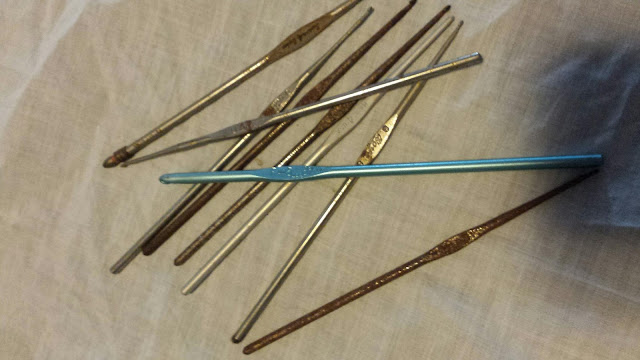