Four Men and the Sea 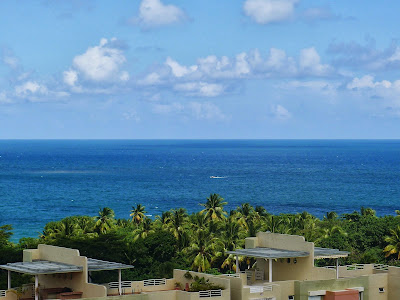 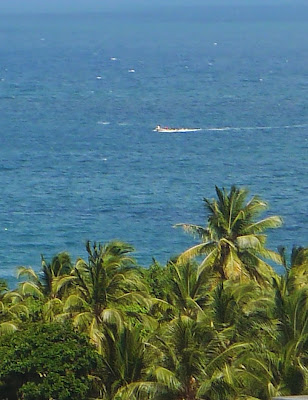 Slowly, then quickly, stopping, resting, casting, stirring, stopping, one gets up, spreads the net, shakes it out, swings it, and lets it fly. They pull it in, while slowly then quickly circling around, stopping, resting, talking, the man in red goes and stands in the front.  The one in green bends over the center and looks down.  Now the boat is wobbling  softly as the waves gently sway it.  The man in black sits next to the motors.  I don't know anything about the bow, stern, or mast, and I suspect what they care about right now is finding some fish in their favorite spot.  They are moving now away from the sand bar... further west hoping they will find some fish to sell.  The man in green is now casting and casting the big net, and Red and Black are right there at his side, ready to help if he needs it.  The boat continues to move, banging on the incoming waves.  They turn and stop.  They have no idea, any one is watching them and they rest.  Regroup.  What to do?

They move west a little more.  Black is in the back, Red is in the center, Green is in the forward, and White is in the front.  They found something. they are all standing now,  pulling in the net.  Things are jumping in the water.  They must have hit the mother load because using the binoculars I can see something shiny, long, and silver caught in the net that they pull and pull out of the water.

Apparently, the catch wasn't big enough because they are still fishing.  They are moving again a little further west.  White is standing now. The boat is wobbling in the water again. Red, Black, and White are together in the back, Green is sitting in the bow with his feet dangling over the water as the boat circles around and I can see the huge net cast over the left side of the boat.  They are waiting it out.  Patience.  This is a necessary characteristic of a fisherman. I, on the contrary,  am anxiously wondering when it is going to end because I want them to get their fish and go.  As they wait  a flock of birds fly overhead fluttering by ignoring their labor.  A cooling breeze blows through where I am jumping from binoculars to laptop to camera to binoculars I don't want to let go, but back I go.

Green has gotten up, while White and Red are pulling the net while bending over the edge of the boat.  Black is in the back. Suddenly Black throws a floater in the water, and what appears to be a net as well,  and it slices through the air quite high, over the men's heads.  He's a pro.

They move east now.  They circle around dragging the net.  Green and White are on the left and Black near the motors, and it is Red now standing in the center of the yola and moving his arms quickly and widely as he pulls on the net.  Each one has their turn.  Are they going home? No, they are circling.  The waves are lapping.   They are waiting.  They are not leaving empty handed.

The boat barely visible is still there.  And I am watching. 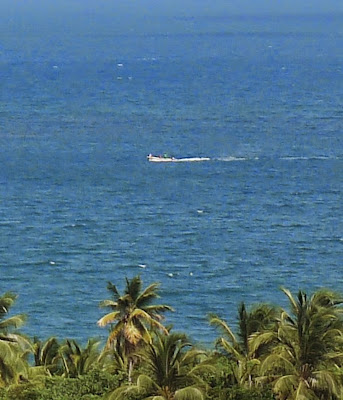 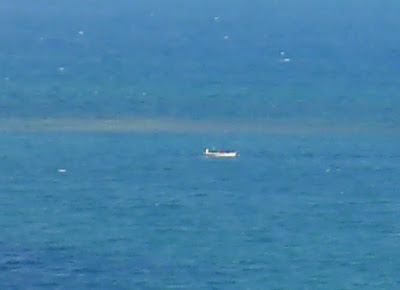 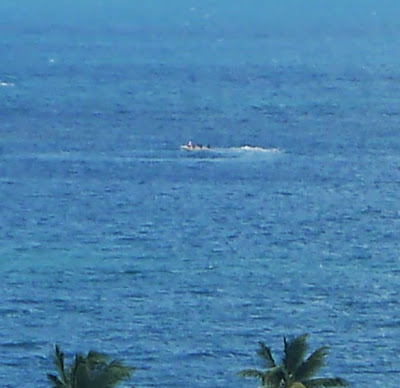